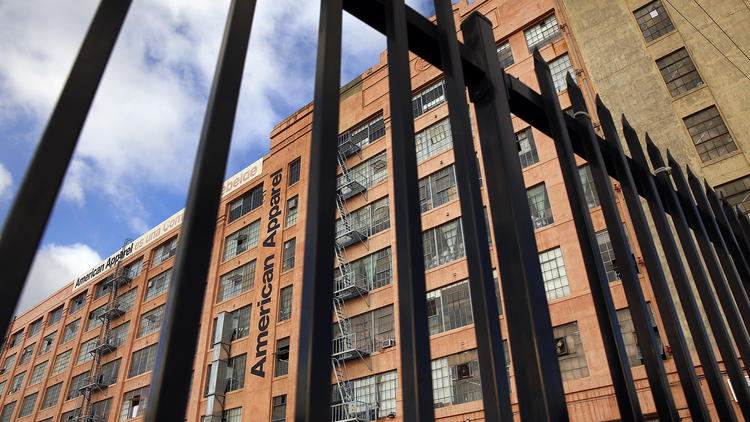 The American Apparel headquarters and manufacturing building is located on Alameda Street and 7th street in Los Angeles.

By: Shan Li and Natalie Kitroeff

Los Angeles was once the epicenter of apparel manufacturing, attracting buyers from across the world to its clothing factories, sample rooms and design studios.

But over the years, cheap overseas labor lured many apparel makers to outsource to foreign competitors in far-flung places such as China and Vietnam.

Now, Los Angeles firms are facing another big hurdle — California’s minimum wage hitting $15 an hour by 2022 — which could spur more garment makers to exit the state.

Last week American Apparel, the biggest clothing maker in Los Angeles, said it might outsource the making of some garments to another manufacturer in the U.S., and wiped out about 500 local jobs. The company still employs about 4,000 workers in Southern California.

“The exodus has begun,” said Sung Won Sohn, an economist at Cal State Channel Islands and a former director at Forever 21. “The garment industry is gradually shrinking and that trend will likely continue.”

In the last decade, local apparel manufacturing has already thinned significantly. Last year, Los Angeles County was home to 2,128 garment makers, down 33% from 2005, according to Bureau of Labor Statistics data. During that period, employment also plunged by a third, to 40,500 workers. Wages, meanwhile, jumped 17% adjusting for inflation, to $698 per week — although that can include pay for top executives, as well as bonuses, tips and paid vacation time.

Many apparel companies say Los Angeles is a difficult place to do business. Commercial real estate is expensive and limited, the cost of raw materials continues to rise and it can be difficult to find skilled workers who can afford to live in the city. They expect things will become even more challenging after the minimum-wage hike further raises their expenses.

Felix Seo has been making clothes for wholesale in downtown for 30 years. His company, Joompy, used to count giant retailers like Forever 21 among its clients. But as prices have gone up in recent years, he said, those fast-fashion peddlers are no longer giving him orders.

To survive, Seo, 59, said Joompy may have to start importing goods instead of producing them locally. “It will be impossible to make clothes in Los Angeles,” he said.

The minimum wage is accelerating changes in the L.A. apparel industry that began decades ago, industry experts said.

In the 1990s, as borders opened up, foreign competitors began snatching up business from Southland garment factories.

Jeff Mirvis, owner of MGT Industries in Los Angeles, said outsourcing was necessary to keep up with low-cost rivals. MGT, which makes apparel sold to retailers, moved its production to Mexico in the 1990s, China in the early 2000s and Southeast Asia a few years later. Its designs and samples are still made in Los Angeles, Mirvis said.

“Manufacturers really have no choice,” said Mirvis, whose father started the company in 1988. “With the rise of Forever 21 and stores like that, price points have gone down and down and down.”

“It’s always, ‘Oh woe is me, If I pay minimum wage at this rate I can’t turn a profit,'” said Nativo Lopez, a senior adviser with Hermandad Mexicana, which is helping American Apparel workers unionize. “They were using that argument when the wage was $6.75 an hour.”

In 1997, when apparel makers were flocking overseas, American Apparel began making cotton T-shirts in Los Angeles and paying its workers higher than minimum wage. At the time, founder Dov Charney recalls, the local apparel industry thought the company was doomed.

“They basically were of the mind that my efforts were futile and juvenile,” he said. “The competitors, the consultants, the banks — everybody thought I was crazy.”

But the company proved detractors wrong, and its success inspired other garment makers to make a go of it in Los Angeles, said Ilse Metchek, president of the California Fashion Assn.

It “was the impetus for many, many other companies to move here to make their goods,” she said. “If it could be done by a neophyte like Dov, other people thought they could do it, too.”

If American Apparel’s production leaves, that “unfortunately will also make a difference,” she said.

Charney was ousted as chief executive and chairman in 2014 after an investigation uncovered allegations of misuse of company funds and inappropriate behavior with employees. In February, the company was taken private after emerging from Chapter 11 bankruptcy protection.

After years of net losses, moving production out of Los Angeles is necessary for the survival of American Apparel, industry experts said. The company initially considered staying in California and moving to the city of Vernon, according to a person familiar with the discussions who was not authorized to speak publicly. After the state raised the minimum wage, executives began looking at manufacturers in the South, the person said.

Sensing opportunity, garment makers from Las Vegas, El Paso, Texas, and Las Cruces, N.M., have already come to the Southland to tout the benefits of moving production to their regions, said Sohn, the economist.

Craig Johnson, a retail expert at Customer Growth Partners, said Los Angeles may become for apparel what Silicon Valley is for technology: the hub for the design, but not the manufacturing, of products. Most chip manufacturing — which gave Silicon Valley its name — left the area in the 1980s.

“That’s not an uncommon situation in a number of industries,” Johnson said. “The creative component, which is in a sense the highest value-add, stays at a company’s headquarters, whereas other components gravitate to a lower-cost environment.”

What could remain in Los Angeles, economists said, are factories that cater to customers who need super-fast delivery of orders and garment makers that specialize in higher-end apparel or niche products.

Nature USA, which makes premium garments sold to brands such as Patagonia and REI, is staying put in the Southland, President Mike Farid said.

The Rancho Dominguez, Calif., company employs about 140 people in two factories churning out hoodies, tops and other items in higher-end fabrics such as Pima cotton.

Founded in 1996, Nature USA was a tiny operation for a decade, Farid said. But in recent years, the company has boomed as retailers have committed to sustainability and seized on organic cotton as a selling point to consumers, he said. In the last three years, the company has enjoyed annual double-digit sales growth.

Farid predicts that firms making cheap garments with razor-thin profit margins will have to look elsewhere. But Nature USA should be able to absorb the extra labor costs; Farid said he’s thinking about making even higher-end garments in anticipation of the minimum-wage hike. His factory workers currently earn, on average, $13 to $14 an hour.

“Not everybody buys at Wal-Mart,” Farid said. “When you are selling a $30 T-shirt, it doesn’t break you to spend $1 more to make it here versus overseas.”

Even clothing companies firmly entrenched in the Southland said they’ve been affected by changes in the local garment industry.

Velvet, based in Culver City, contracts out its clothing-making to third-party manufacturers in Los Angeles, Chief Financial Officer Michael Rosen said. The company has seven retail stores and also sells its clothing to boutiques and department store chains such as Nordstrom.

Over the years, Velvet has seen its costs rise as more money is required to monitor factories to ensure they are abiding by labor laws, Rosen said.

“There are many fewer production facilities here, so it’s harder to find manufacturers that are properly licensed,” Rosen said. “The oversight that is required is much more.”

Marina Neza, 66, was one of the workers who lost her job as part of American Apparel’s latest layoffs last week.

Neza said she used to make about $500 a week as a sewing machine operator. Over 32 years in the industry, Neza said she’s been fortunate to work for many apparel makers in Los Angeles that paid decent wages.

But Neza said she’s worried about finding another job to make ends meet. Her husband is sick, she said, and can work only part time.

“Apparel manufacturing has been my life,” she said. “There are many, many companies that have moved out of here. I’m not sure about finding work.”